It all started with Camille.

Camille is a mother of three living in a low-income community in Lagos, Nigeria. She runs a small store on her street. In the community where Camille lives – similar to communities where approximately 66% of Lagosians live – uncollected waste is an issue.

Urban waste ends up in waterways, leads to pollution, flooding and diseases like malaria. Camille worries about her children’s health and welfare. Her neighbors miss work due to flooding caused by blocked drainages. As someone who earns less than $2 a day, Camille struggles to feed her children and often stays up at night thinking of how she can make ends meet.

“Camille is one of many women who we, the Wecyclers team hoped to serve when developing the Wecyclers concept in 2012,” Bilikiss Adebiyi-abiola founder Wecyclers told GIRL GONE INTERNATIONAL.

In this article we learn how Bilikiss and Wecyclers, a for-profit social enterprise in Nigeria turned the waste collection problem in Lagos into an opportunity that is now being duplicated in many countries around the world. If properly harnessed, it will provide solutions to many problems faced by low-income communities and empower women.

How we made incentive-based recycling work for women in Nigeria

Wecyclers was created to provide a low-cost waste collection infrastructure to communities and aggregate and sell to recyclers who struggle to buy enough waste to serve as feedstock in their recycling processes. In the Wecyclers model, households are encouraged to sort their recyclable waste. Waste is collected weekly from households by people on motorized tricycles, Wecyclers’ franchisees or at neighborhood collection centers.

At the point of collection, waste is weighed and recorded in an app. Within a few hours, the household receives an SMS message confirming the pickup. In the SMS, the amount of points earned during the pickup is reported as well as the total number of points they have earned. Every three months, these households can decide to exchange their points for cash. Much needed cash.

Women bear the brunt of poor waste management in low-income communities as they are often the ones responsible for taking care of the home. Since plastic production started in the 1950s, only 9% of all plastics are recycled, 12% has been incinerated and 79% has ended up in landfills and the natural environment. It makes perfect sense for women to seize the waste opportunity and utilize it as a tool for self-empowerment.

The scale of the opportunity was something that Mrs. Taiwo saw when she became a community liaison for a joint project between SOS Children’s Villages and Wecyclers. Mrs. Taiwo was skilled at navigating her community and was a key contributor to the success of the project, which introduced recycling to low-income women in a suburb of Lagos.

Over the years, Mrs. Taiwo was absorbed into the Wecyclers workforce where she was first a supervisor and then a hub manager. When Wecyclers introduced its franchise program where small businesses would be created and engaged in collecting and recycling urban waste on behalf of Wecyclers, she signed up. She became one of the first few franchisees. She is now her own boss and has created employment opportunities for people in her community. Mrs. Taiwo now employs 20 sorters and 4 machine operators/drivers. Her business has grown to having 2 tricycles, 1 pickup truck and 1 baling machine.

More womxn will engage in recycling in countries with developing economies as the waste value chain expands and demonstrates its ability to provide livelihoods, drive significant recycling volumes to the circular economy while cleaning fast growing cities.

At Wecyclers, women are 80% of the subscriber base at the various Wecyclers recycling hubs. As Wecyclers grows its franchise networks at its locations, scores of women are being engaged in sorting the waste, in supervisory roles and in management.

Women like Muslimat, a single mother, had to liquidate her business to support her son’s education. She was out of a job, with no hope, when a friend went to the nearby Wecyclers hub to look for work. Muslimat was intrigued and decided to apply. Her friend didn’t get the job, but Muslimat did and she became a sorter at Wecyclers. Sorting through the tons of waste collected by the Wecyclers collectors and recycling exchanges. She toiled, sorting plastic bottles by color, and removing labels and caps and was able to send her son to school.

Over the years, incentive-based recycling has demonstrated significant positive social impact. It tackles ten of the Sustainable Development Goals (SDGs) and has significant potential at scale. Incentive-based recycling can also create decent livelihoods. Livelihoods where people are engaged in a safe environment and earn enough to take care of their families. Livelihoods that will feed children, buy medicines for the aged and send children to school. All these livelihoods and more can be created in a situation where people are engaged in the circular economy. 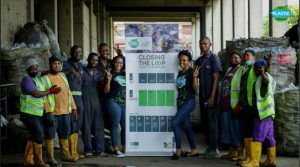 Bilikiss is currently the Director General of the Lagos State Records and Archives Bureau (LASRAB). In September 2020, Bilikiss was appointed as the pioneer Chairperson of the Fair Plastic Alliance; a hands-on alliance of people, entities and organizations engaged in building an inclusive circular economy.

Light as air, readable anywhere. The only free travel and lifestyle magazine for women living, loving, working, studying or travelling abroad.. or hoping to!